I did some generative art using HTML5 (using Haxe/JavaScript). It draws a target image using “stamps” out of a different source image. Each drawing step gets compared using a fitness function to see if that stamp looks more to the target or not.

It can generate very interesting details. This one uses van Gogh’s Starry Night as input image: 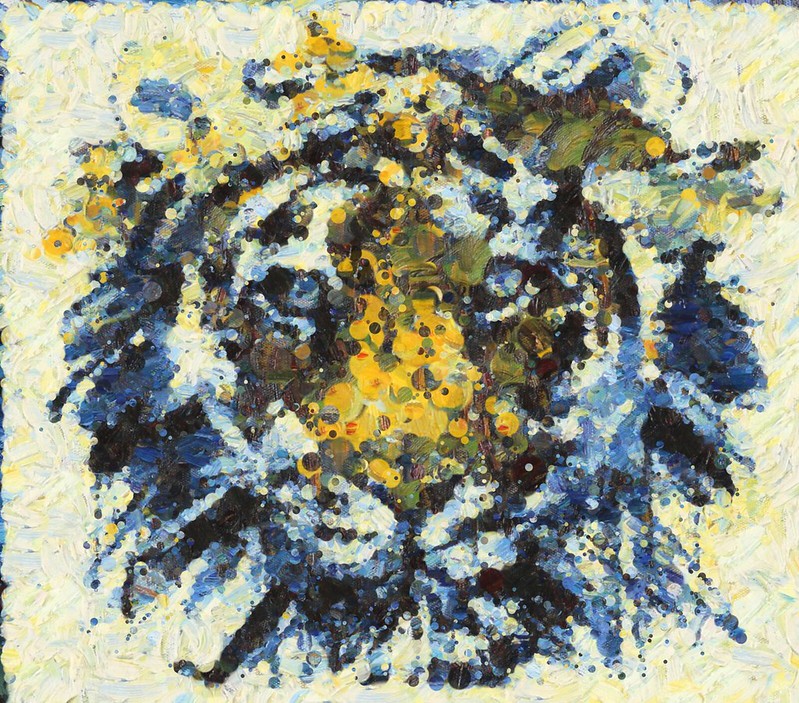 This uses a sketchy looking tiger as input source. It works very well as pattern: 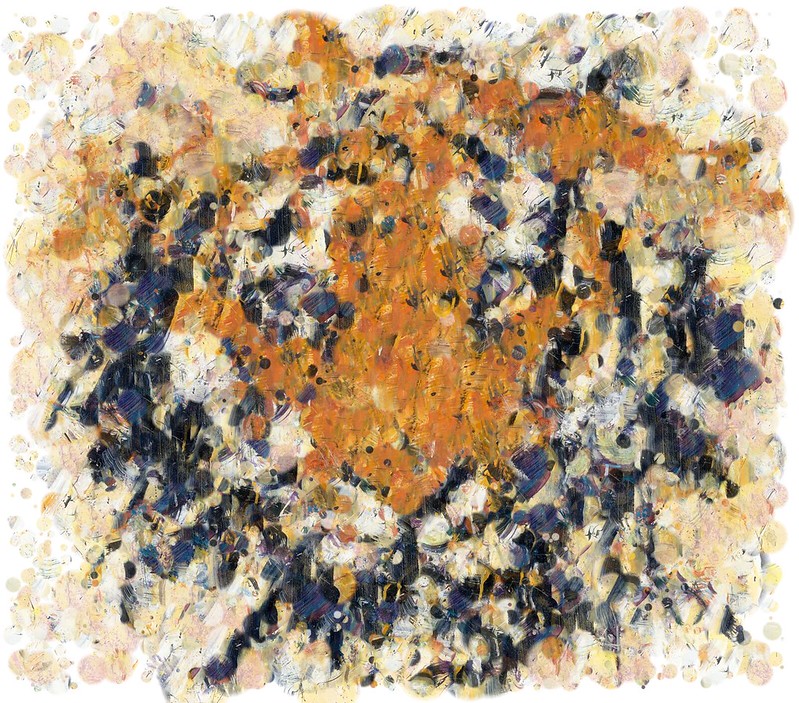 This also allows to create artwork that almost looks like it is actually painted. This one uses van Gogh’s Night over Rhone as input image: 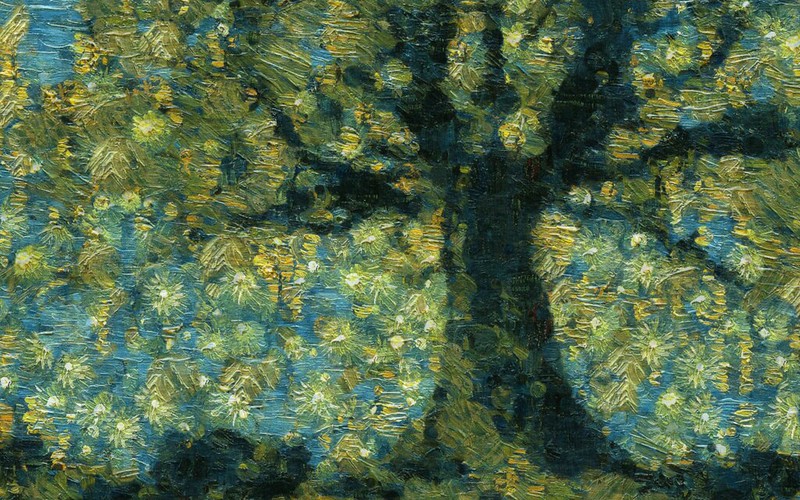 I do want to keep playing with the brush, now I’ve used a circle brush which you can see. It would be nice to have something that blends a bit more.

» More in this album

We have been working on a new website which went live today: the Haxe Code Cookbook. It has categorized code snippets with additional explanations; small code tutorials and examples in a central place.

The Haxe Code Cookbook can be found here:
http://code.haxe.org/

There is also a GitHub repository. The website is powered by pull requests so it is easy to add new content. Everyone with a GitHub account can contribute by putting markdown formatted files in one of the category-folders we’ve created, or suggest a new one. The site is generated with Haxe (of course) and with an automatic process (using Travis) new snippets will go live immediately after being reviewed.

We hope this will grow into a useful central world with Haxe coding snippets and tutorials! It has quite some features and there is also some documentation available.

I’ve created the logo and the website for the HaxeFoundation.

A common example of using bitwise operators is to put multiple states into one integer. Some call them flags.

For example, lets say you want to build a app where users have different rights to view a document. You could create a User class with multiple booleans like this:

But if you want to optimize it, you could also put all those values into an variable. Computers deal with ones and zeros right?

In this case we create a string with zeros and ones. We could say that the last value means “can view” and the one next to it “can access” etc.. In our case only the last digit is “1” so that means it is on (true). the others are “0” so they are false.

Well, this could work, but working with numbers in strings is not very elegant, and also not practical. And it’s awkward when you want to add another flag to it. Why don’t we just use a number for that? That’s where bitwise operations come in. Let’s put it in an integer:

Given the last explanations,
we can say:

That would mean that:

When we translate it to code it would be:

For those who can count binary, 000011 in real value equals 3. By the way, the leading zero’s don’t mean anything.

Ok, let’s move on and define all our flags. Define a new class that has all the access flags in it like this:

Play with this live-example to see how you can blend different flags.

Nice! now we know how to mix and blend different rights to the user. Let’s say you want to make somebody admin you can do this:

To go back on how we declared the Access class, I think it can be improved. It now has that count that is slightly annoying since it doesn’t feel natural. Let’s look at this table.

As you notice in the last column, the same values can be achieved with a left shift <<. So “000001” equals “1” but is the same when we write it like “1 << 0”. Personally I think its more readable to have this last column in your code because it just increases normally, what do you think?

Let’s use the power of Haxe to simplify the Access class. Instead of using static vars, let’s create an enum abstract.

Ah, in my opinion everybody can maintain this. Even if you don’t understand what’s happening. Since we use the ‘inline’ there is no actual function call in the output. You can see in this live-example how the generated output looks like. Neat! Now, that’s it for the Access class.

We created an actual type!

Hey! Since Access is now an actual type, we can even define user.right as follows:

But it still translates and actually works as an integer when it is compiled.

Working with bitsets in Haxe

Let’s go back to the user.rights field. What if we want to remove a flag? The syntax for that would be:

😯 Aiiii, there goes our readability isn’t it?
Well lets create a utility class that contains a remove function. I use this BitSets class from Flambe, which has some other nice functions too (like testing if a integer contains a flag).

With the above, we can now use this much more readable code:

With Haxe, you could also leave out the enum class (if it’s imported or a class inside your module), so we can write:

It doesn’t get cleaner than that.
Check out this full live-example to see how it all comes together and what the effect is on the generated output. The app is created with Unity, the actual game on ChromeCast is build with Haxe + Flambe. We created this game to build a showcase for the new Google GameManager SDK.

If you also want to build a game with Haxe for the ChromeCast, I’ve open-source the Cast SDK extern classes that are useful to work with the JavaScript SDKs. This post is about grabbing conditional compilation values and print them in the output context using a macro function. Then we can use it at runtime.

Let’s say you want to display in runtime if your code is compiled in debug or release mode. You could do this, using conditional compilation tags:

This is (maybe) good enough if there are two values, but in other cases where there are multiple values it will not work. A conditional compilation define can hold a value. Example: you can compile -D my_value=3 or -D my_value="nice". By default the Haxe compiler version is provided like this. The following works, but it looks messy and is not really maintainable:

To make a function that works for both cases, we write a macro function that grabs a define value and returns it as expression of a String.

What’s happening here? The Context.definedValue provides us every conditional compilation value. We can grab the key we’re looking for, and return them as value expression for the ouput context. In case a value isn’t defined, a “fallback” value is used (defaultValue).

This allows us to grab all these values out of the box:

Of course, when we compile the application with a custom define like -D target=mobile or -D target=web, you can use MacroUtils.getDefine('target') in your code too.

It has been almost a year, but these week the Haxe Foundation released a massive new version of the Haxe Cross-platform Toolkit: Haxe 3.2These are some of the new features I’d like to highlight:

You can already start playing with the Python target in the latest FlashDevelop.

Beside these compiler / language changes, the Haxe related website has gotten some very welcome face-lifts:

Haxe has become a solid language/toolkit for developers. Today it has more than 11.000+ commits on Github from a high skilled team with 70 contributors. This release again demonstrates the power and potential of a language that serves as the solution for cross-platform development.

I’m using Haxe for almost 2 year on daily basis, I’m really enjoying using it. It’s open-source, free and complete to do whatever you want on whatever platform 🙂